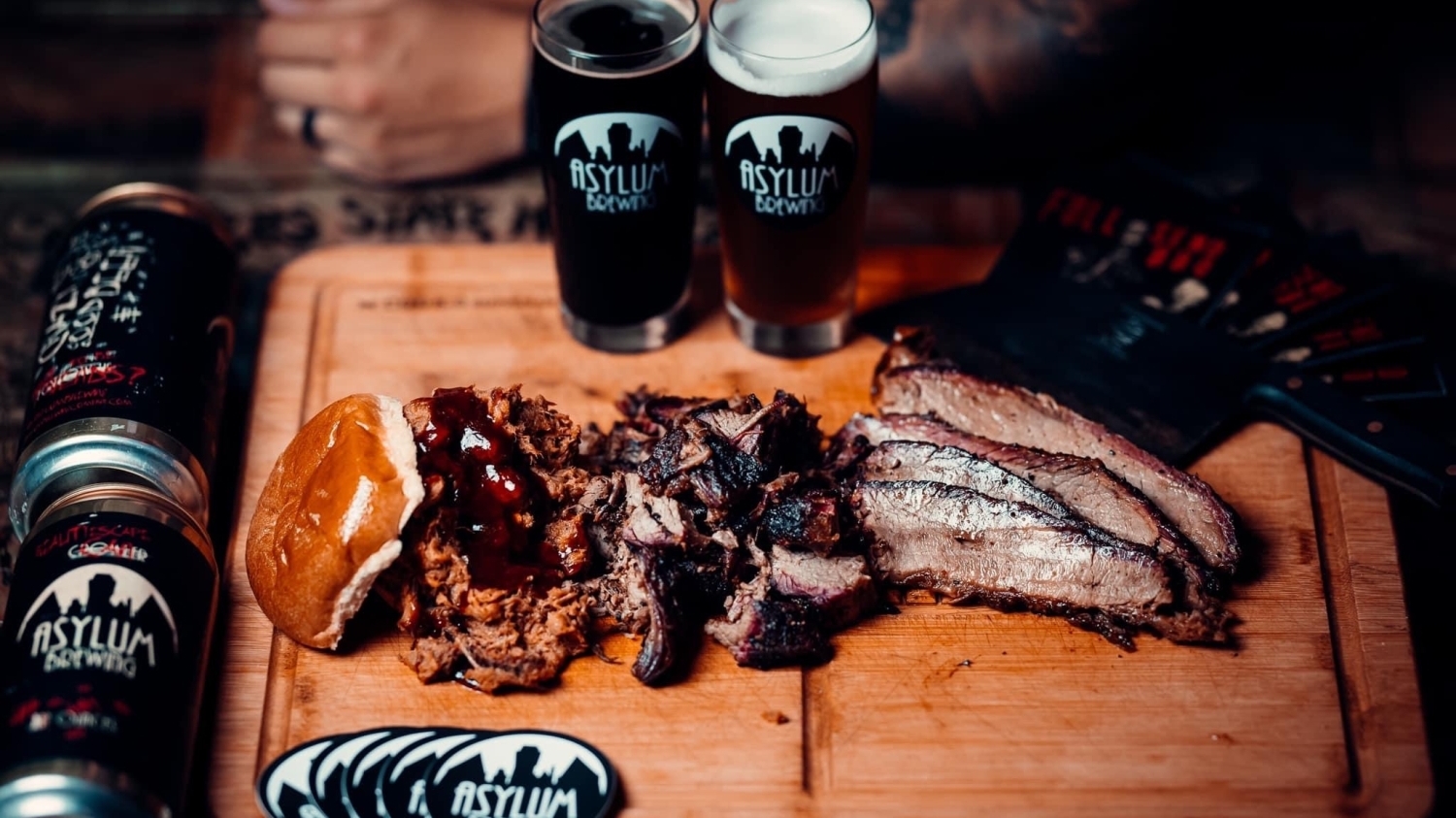 Voice of OC Food Columnist – reporting on industry news, current events and trends. Panoringan’s previous work includes writing about food for 8 years at OC Weekly in which she interviewed over 330 chefs, restaurateurs and industry professionals for her weekly column “On the Line”. She has been recognized by the Orange County Press Club and is also a recurring guest on the AM 830 SoCal Restaurant Show.

When we refer to chefs as veterans, the typical connotation means having extensive experience in the kitchen. In honor of Veterans Day, this column is dedicated to those who served in the military and hospitality industry. These two people have not only represented their country, but demonstrate a keen sense of cuisine through their respective culinary concepts.

Residing with his wife Marlena (and expecting their first child on New Years Day) in Anaheim, Dominic Cagliero was a high school student when he decided to enlist in the National Guard in 2013. “The military gave me l ‘opportunity to see most parts of the world like Europe, Asia and various parts of the United States, ”he said. Assigned with the designation of an infantryman, his responsibilities focused on close combat with enemy forces. “We are the backbone of the military, so expectations from us were generally very high,” Cagliero explains.

During his time in the military, Cagliero was introduced to the style of slow, low cooking with smoke while serving in different parts of the world. Fascinated by the barbecue profession, he is responsible for learning the different techniques and methods. Using his acquired skills, Cagliero began cooking for the neighbors at home.

Even with four years remaining on his Army National Guard contract, he recently started Full Shipment BBQ LLC, a Texas fusion barbecue start-up, while stationed at Joint Training Base Los Alamitos. “The term comes from the military verbiage ‘send it’, which means go ahead and do it. “Complete dispatch” means to execute something with 100% effort, ”Cagliero said.

He smokes his meats over oak wood and simply seasons it with salt, pepper “and love,” according to Cagliero. Signature items include “dino ribs,” large beef ribs that average two pounds of meat, and “Thor’s hammer,” three to four pounds of whole beef shank. The fusion part of its concept refers to the brining or marinating of meats in more international flavors like Indian (tandoori chicken), Filipino (tocino pork) and Vietnamese (chicken satay) before smoking them.

Originally a delivery-only service, Full Send added to its repertoire by appearing on the brewery circuit with pop-ups at Anaheim’s Asylum Brewing in July and Santa Ana River Brewing Company in September. Last month, pitmaster Cagliero offered a special order week that included a designated pickup location in Anaheim.

Learning to function with little to no sleep is a skill Cagliero hadn’t planned to use in his side business, but constant focus on his craft is necessary to ensure a finished product that meets his standards. Some cooking times total 14 hours or more, meaning he sleeps a total of three to four hours spread over the night. “Every hour or so I check the meat and make sure we have good characteristics like good rind, greasy finish, etc.,” he said. It’s this level of commitment and attention to detail that produces Full Send’s quality barbecue.

Future plans are to make the business a full time commitment. Dominic Cagliero is currently looking for investors to acquire a food truck next year. “My goal over five years is to have a brick and mortar serving as a good barbecue, ax throwing and maybe a dog-friendly bar, ”Cagliero said.

I was introduced to Chef Melissa Ortiz during a Topic for Another Story interview at a brunch in Long Beach. Ortiz, originally from Anaheim, enlisted in the military out of high school and was stationed at Fort Bragg, North Carolina, as a finance specialist under the 126th Finance Battalion from 2004-2008. Thereafter, she served in the reserves until 2010, which included a year in Djibouti, Africa.

She returned to the United States from her deployment the following year, wanting to use the GI Bill. While abroad, Ortiz spent a lot of time cooking on the beach when she was deployed to Africa, as their bedrooms did not include a kitchen. Instead of eating in the common dining room, Ortiz befriended the staff working in the kitchen and got a weekly grocery order that she would take off-site to cook. She set up a makeshift grill on the beach for her meals.

“Traveling the world sparked my interest in food because I was forced to switch from being picky to exploring for food. ”

Ortiz’s friends encouraged her to enroll in culinary school, taking classes at the Art Institute of California – Orange County campus in Santa Ana, which closed permanently in 2018.

After culinary school, Ortiz spent time honing his skills by directing (pronounced stazhjing, it is a temporary unpaid internship) in kitchens as far as France. Closer to home, she worked at Connie and Ted’s in West Hollywood, opened the Bamboo Club in Long Beach, and spent time at Little Sparrow in Santa Ana. Most recently, she was Chief at the United States Embassy in Kabul, Afghanistan, for 16 months, and returned in May of this year.

Local caffeine spot Rose Park Coffee Roasters is a must see in Long Beach with its three branches all located within the city limits. Ortiz worked there before leaving for Kabul, becoming friends with the owners (one of whom is a veteran). The flagship spot at 800 Pine Ave. is the only place with enough floor space to house a kitchen, and she was recruited to launch brunch and dinner service during the summer.

What is the GI Bill?

Based on 1944 Military Readjustment Act, the GI Bill includes payment of tuition and fees, a monthly housing allowance, and an allowance for supplies and textbooks for up to 36 months for military veterans. “GI” is the abbreviation for General Issue, Government Issue or Ground Infantry; but its original translation was in galvanized iron. It was also a nickname soldiers gave themselves during World War II.

Chef Ortiz describes the cuisine as a menu with a focus on seafood and vegetables. Ortiz is convinced that she should highlight her life experiences on a plate. “I think vegetables are underutilized and I want this to be a moment for the city I live in to experience my journey and all the years and training to see how I interpret food,” he said. she declared.

The parallels between military service and cooking skills are strange, as Ortiz explains, “It helped rehearsal for consistency due to the training I had.” The disciplined army structure rooted in Ortiz contributes to his cookery (and strict military) mantra: “Stay alert, stay alive.” She stresses the importance of preparing for success with the example of being aware of your establishment (preparation), “or you will drown on duty,” she said.

Dinner service is offered Thursday to Saturday evening from 5 p.m. to 9 p.m., with brunch service on Saturday and Sunday from 9 a.m. to 1 p.m. Wanting to provide a dining experience for veterans, on Thursday, November 11, Rose Park on Pine will be offering 50% off the bill to veterans and one guest.

Interview with So Cal Restaurant Show

On Saturday October 30, I visited Angel Stadium for an interview at the SoCal Restaurant Show with host Andy Harris. We discussed my recent dining experiences on Royal Caribbean’s Symphony of the Seas and a dinner at the Khan Saab Desi Craft Cuisine in Fullerton, among other topics.

Links to both segments can be found here and here. My next appearance as a representative of the Food section of Voice of OC will be January 1, 2022 on KLAA (830 AM).

Anne Marie Panoringan is a food columnist for Arts & Culture at Voice of OC. She can be contacted at [email protected]

Subscribe today to receive last-minute Voice of OC text messages (free over and above your standard messaging rates).