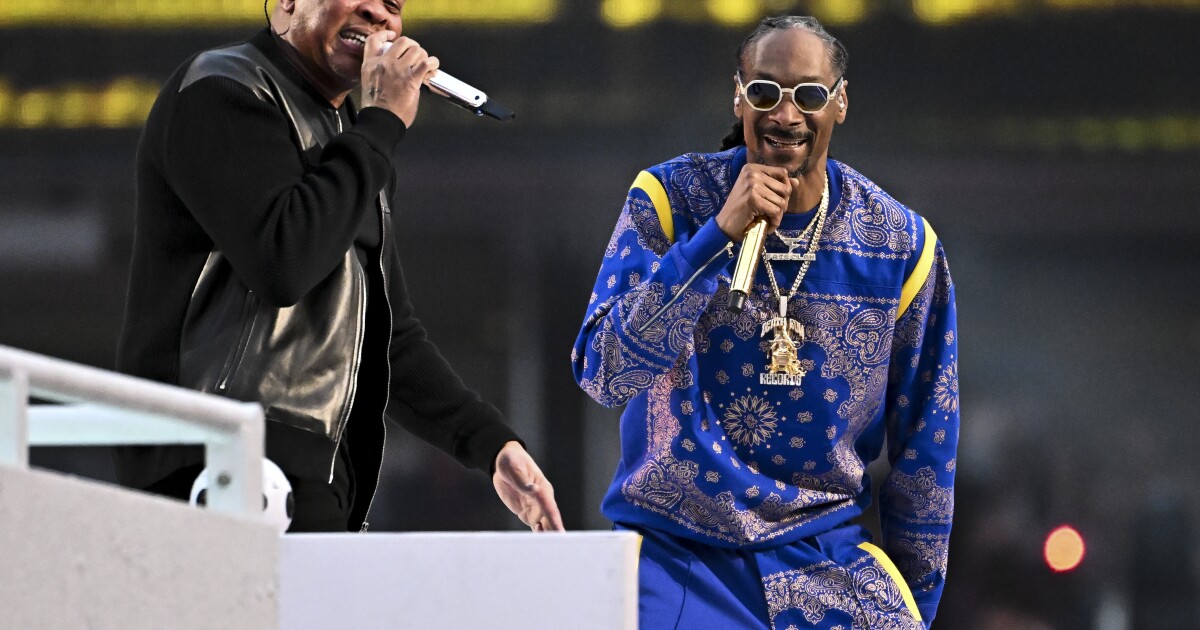 Many loved the Super Bowl LVI halftime show. Not these readers

No fans at halftime

Most of us look forward to the Super Bowl halftime show. Pop music critic Mikael Wood described this year as “an all-time great show” [“Hip-Hop Giants Came to Play,” Feb. 14].

Personally, I was appalled. There was no beauty, no grace, or for that matter any melodious music. Just people jumping up and down holding each other’s crotch and shouting words that are too hard to understand, even with subtitles.

So disappointing. Can’t we do better than that, so we can all enjoy a show that represents many diverse acts?

Music critic Michael Wood has the audacity to suggest that hip-hop is American music.

Music is defined as “vocal or instrumental sounds so combined as to produce beauty of form, harmony, and expression of emotion”.

Characteristics of Sunday’s halftime performances were indecipherable lyrics and non-existent melodies. Composers from George Gershwin to Johnny Mercer to Paul McCartney and Stephen Sondheim have likely turned in their graves.

Can someone tell me what Dr. Dre said? I didn’t understand a word. And that’s what we’re told to believe, that’s the future of music.

Views of the stadium

In her column, Carolina A. Miranda [“Even Its Cheap Seats Are VIP,” Feb. 8] writes that the highest seats in Sofi Stadium “may be high up, but you never feel far from the action”.

I have been a subscription holder in these nosebleed seats for two years now and I can assure you that is far from the truth. Our seats are so far from the action on the pitch that we struggle to catch the ball on kicks and passes. We can see the quarterback start throwing the ball on a pass play and the next thing we see is the tackled receiver.

I couldn’t see the play where the San Francisco 49ers quarterback threw the interception that basically ended the game. Someone in my section yelled that it was a safety, which it wasn’t.

I am extremely unhappy with these nosebleed seats.

Articles by Carolina A. Miranda [on SoFi Stadium] to date have been excellent.

I look forward to reading the information about accommodations for the disabled and those with reduced mobility at SoFi Stadium.

It seems obvious that Mia Lehrer is the one who designed the LA River [“From the L.A. River to SoFi Stadium” by Carolina A. Miranda, Feb. 13]. She’s awesome – hire her now and fund her plan.

Regarding TV critic Lorraine Ali’s story about Super Bowl commercials [“Star Power Out in Force in Ads,” Feb. 14]: For too many of these commercials, lost in special effects and celebrity star power is the product or service being advertised. We see the name for a split second at the end of the commercial, seemingly as an afterthought. No mention of product features or usefulness.

For obscure advertisers who need and want the exposure the Super Bowl provides, it’s a wasted opportunity and very expensive in production costs and airtime.

Ad agency creatives probably don’t care. They seek recognition and admiration from their peers. They compete to see who can produce the funniest and most entertaining 30 or 60 seconds.

I blame clients for allowing their ad agencies to spend all that money without a meaningful return.

Something spirited this way comes…

About “Oscar Nominations: Family Matters” [Feb. 9]: Glenn Whipp’s witty comment about ‘The Tragedy of Macbeth’ failing to garner a Best Picture nomination (“‘Something Wicked Is Happening’ pretty much sums up all the Oscar nomination announcements, don’t you think?”) sums up why Whipp is my favorite LA Times entertainment writer, bar none.

The art against the artist

I found it inappropriate and even offensive to read his rant about Armie Hammer’s alleged abusive treatment of women featured in his review of “Death on the Nile” [“A Float Down Denial River,” Feb. 11]with the not-so-subtle suggestion that the filmmakers should consider not hiring him.

In my opinion, Chang should stay in his lane and leave controversial social issues to others. Enough with the cancel culture.

Hammer gave great performances in adventure films such as “The Social Network” and “Call Me By Your Name”, and simply deserves an assessment of his work in the film in question, not speculation on how the actor’s off-camera activities might or might not resonate with audiences.

I would remind Chang that over two decades ago two more “Hollywood golden boys” (Rob Lowe and Hugh Grant) were caught up in sex scandals that did not harm their long-term careers.

And I would remind everyone that Hammer was charged with sexual assault, neither charged nor convicted.

What’s wrong with these images?

Regarding the online gallery “The Take: Faces in the Crowd of an Exclusive Super Bowl Party at SoFi Stadium” by Allen J. Schaben [Feb. 13]: The Times has once again performed its favorite magic trick – making half the local population disappear – by publishing a series of photos that do not include anyone from the region’s largest racial/ethnic group, Latinos, who make up half of the county’s population.

Yet, as always, the editors, who characterize the photos as a “representative sample of Los Angeles”, scrupulously ensured that three other groups – each smaller than the Latino population – were included: whites, blacks and Asian Americans.

While I think this particular magic is hackneyed and self-destructive, I still have to ask how do you accomplish this trick? In this case, did you select the specific party to feature because it wouldn’t have Latino guests, or did you have to ask your photographer to avoid Latinos?

Do you think the consistent and overt discrimination of the Times causes publicists to exclude Latinos when hosting events?

To submit a letter, send an email to: [email protected] Enter your name and city of residence. Letters are subject to change for space and content considerations.

In the most luxurious ski resorts in the world