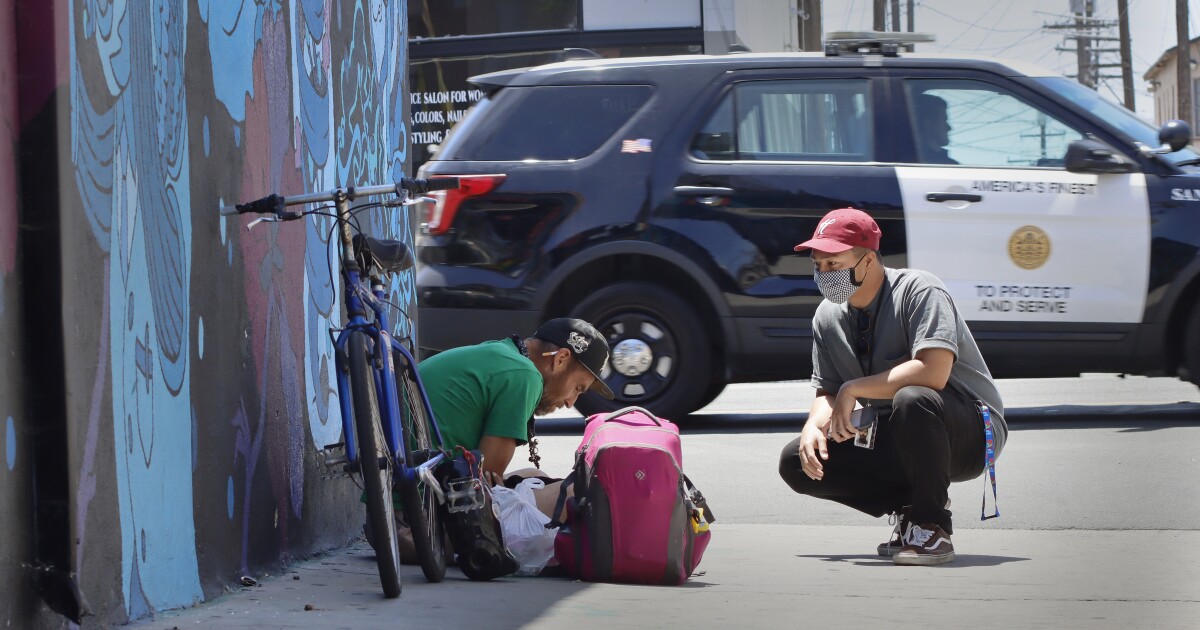 More shelters, services and awareness for the homeless expected in 2022

Efforts to get the homeless off the streets and place them in shelters, housing and programs are expected to increase in the new year as more towns in the county take action to address the problem.

However, skeptics would be right that they’ve heard it all before. For years elected officials have said tackling homelessness is one of their top priorities, but settlements still line many streets and can be found in canyons as shelters remain full.

But something may be different this time. Some cities that have never allowed shelters are considering opening their first. The city and county of San Diego are working together on new programs, and hundreds of affordable housing units will soon be available for those currently on the streets or in shelters.

In January, the first tenants are expected to move into Father Joe’s Villages’ 407-room Saint Teresa of Calcutta Villa affordable housing project in East Village, with all rooms expected to be occupied by March.

Also in January, the annual county-wide one-time homeless tally is expected to resume after being skipped last January due to the pandemic. It is not known whether the homeless population has increased, but there is reason to believe it has.

Last April, the Regional Homelessness Task Force released a report which found that the number of people who became homeless for the first time more than doubled in 2020, possibly due to the pandemic. The Homeless Crisis Response System report found that the number of new homeless people in the county rose from 2,326 in 2019 to 4,152 the following year, a jump of 79%. The previous year saw a 6 percent drop from 2018.

Over the next few months, two new shelters are expected to open at each end of the county.

The city of Oceanside bought an old school building with plans to open a 50-bed shelter and chose the San Diego Rescue Mission to manage it.

In National City, the Rescue Mission bought another school building that had been used by a church, and the nonprofit recently got permission to convert it into a 160-bed shelter. Neither this town nor Oceanside has had shelter all year round.

Other shelter beds are also arriving in Escondido, where Interfaith Community Services operated the 49-bed Haven House as the only shelter in North County. Interfaith CEO Greg Anglea said plans were underway to convert the Hawthorne Veterans and Family Resource Center on North Ash Street into a shelter that will serve 10 to 14 families.

The nonprofit is also expected to complete the Abraham and Lillian Turk Salvage Care Center in Escondido soon, which will provide 54 beds for homeless people released from hospitals but still have some healing ahead of them.

In Chula Vista, the city council recently approved a plan to create 66 prefabricated units that will provide temporary housing to the homeless. The first of its kind in the county, the plan calls for 63 units with two beds each and three units that can accommodate four people for a total capacity of 138.

With nothing in the works yet, Vista city council agreed in October to ask developers to submit requests for proposals to develop the city’s first shelter.

Also on the horizon, the Lucky Duck Foundation has donated a large tent structure they own in San Diego or any city that would consider using it as a shelter. The tent can hold 250 beds and was used as a shelter by the San Diego Veterans Village and at one point was donated to Chula Vista for use as a shelter.

The city and county of San Diego recently opened a 50-bed shelter on Sports Arena Boulevard for homeless people facing drug addiction and mental illness, and they plan to open safe shelters, shelters, homes in the near future. longer-term housing for recovering people.

The county has also stepped up outreach efforts to connect more homeless people on the streets to services and shelters. Under the new agreement with People Assisting the Homeless, eight PATH outreach workers are in East County, four in North County, three in South County, and two in the Central and Central North region. .

Measure the operational and quality-adjusted efficiency of Chilean water companies