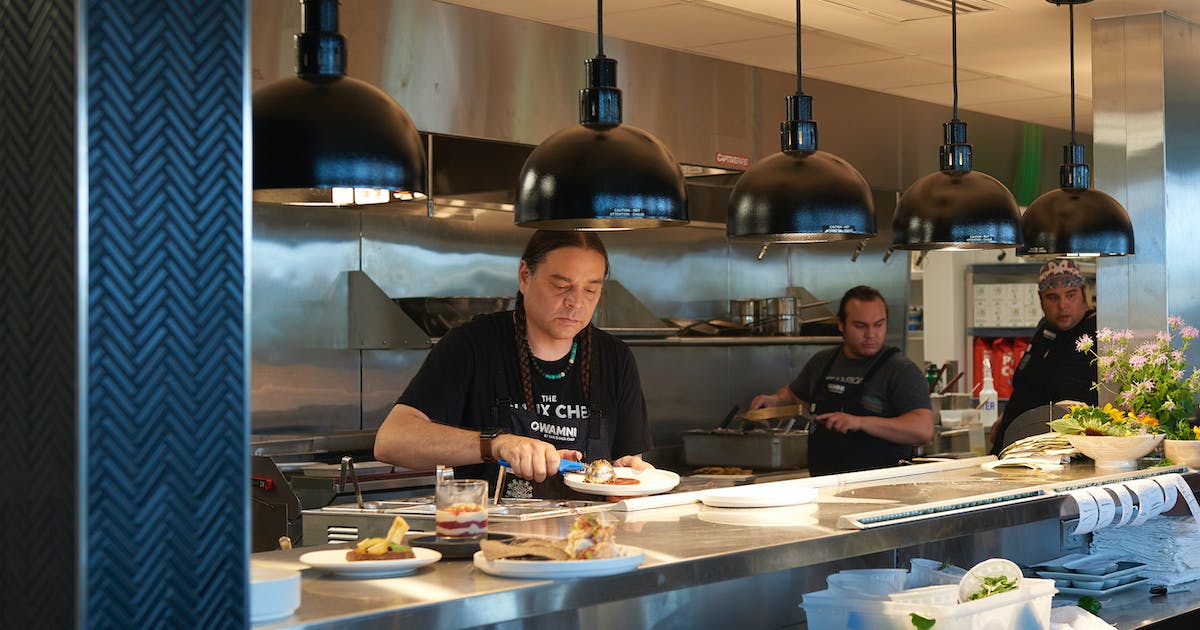 Owamni by the Sioux Chef, Minnesota’s first full-service Native restaurant, has been nominated for Best New Restaurant by the James Beard Foundation Awards. The national category pits the groundbreaking Minneapolis restaurant against 10 others from across the country.

The finalists were announced on Wednesday, eliminating contenders from a list of 30 semi-finalists announced last month.

These high-profile awards, widely regarded as the highest honors in the industry, recognize and celebrate excellence in restaurants, cookbooks and journalism. The restaurant awards are divided into 10 national categories and 12 regional categories.

Best New Restaurant is one of the most competitive national categories. It honors a restaurant “opening in 2020 or 2021 that is already demonstrating excellence in cuisine and hospitality and looks likely to have a significant impact in the years to come”.

Owamni, which Sean Sherman and Dana Thompson opened in 2021 in the Water Works Pavilion, a scenic location overlooking the Mississippi River’s Owámniyomni Falls, has won global accolades, including being named Star Tribune Restaurant of the Year. Reservations have been hard to come by for Sherman’s skillful exploration of native American Indian cuisine. Owamni’s menu omits all ingredients brought to North America by the colonizers, including wheat, sugar, and dairy.

“We’re different and we kind of stand out,” Sherman told the Star Tribune on Wednesday. “We’re the only restaurant doing what we do, so we’re really happy to get notice for all the hard work.”

Minnesota was last represented in this category by two Gavin Kaysen restaurants, Demi in 2020 and Spoon and Stable in 2015.

Sherman is also on the shortlist as a finalist in the regional category, Best Chef Midwest. He faces competition from two other local chefs, Jorge Guzmán from Petite León and Yia Vang from Union Hmong Kitchen.

Three of the six nominees for Best Chef Midwest operate restaurants in Minneapolis. All three notably highlight the cuisine of their own culture in their restaurants. Sherman, who was born in Pine Ridge, SD, is Oglala Lakota. Guzmán was born in Mexico City, and Vang came to the United States as a Hmong refugee as a child.

Guzmán was previously nominated in this category, in 2017, for his work at Surly’s Brewer’s Table. But that recognition is for his work at Petite León, a restaurant he claims ownership of and where he uses Mexican ingredients.

This is Vang Beard’s first appointment, a remarkable achievement for the chef who built his reputation with a traveling restaurant that had no permanent address until last fall. (It’s part of the Graze Provisions and Libations food hall.) Vang likened his culinary journey to that of the Hmong people, making the most of what’s available and enriching Minneapolis’ restaurant landscape.

Sherman had previously been recognized by the James Beard Awards as a cookbook author, but this is his first year at his restaurant, located on a site sacred to the Dakota and Anishinaabe people. Guests are greeted as soon as they enter by a neon sign reminding them that they are in their native land.

Minnesota had a relatively strong showing among the nominees, despite garnering the fewest semifinalists in recent years.

Two Minnesotans who did not land nominations were Erik Skaar, who was a Best Midwest Chef semi-finalist for running the seafood-centric restaurant Vann; and Kim Bartmann, who was a semi-finalist in the national Outstanding Restaurateur category. Union Hmong Kitchen in Vang was also on the long list of Best New Restaurant, but did not advance in the competition.

Bartmann’s recognition of the Beard Awards sparked controversy locally among former workers. Bartmann had reached a settlement last year with the state attorney general after an investigation into wage violations. The controversy came at a pivotal time for the awards, which return in 2022 after a two-year hiatus caused by the pandemic – and an internal reckoning on diversity.

The winners will be honored at a gala on June 13 at the Civic Opera House in Chicago.

This is a developing story.

Care, Understanding, Agreement: In Search of a Way Forward in Sexual and Gender Minority Health