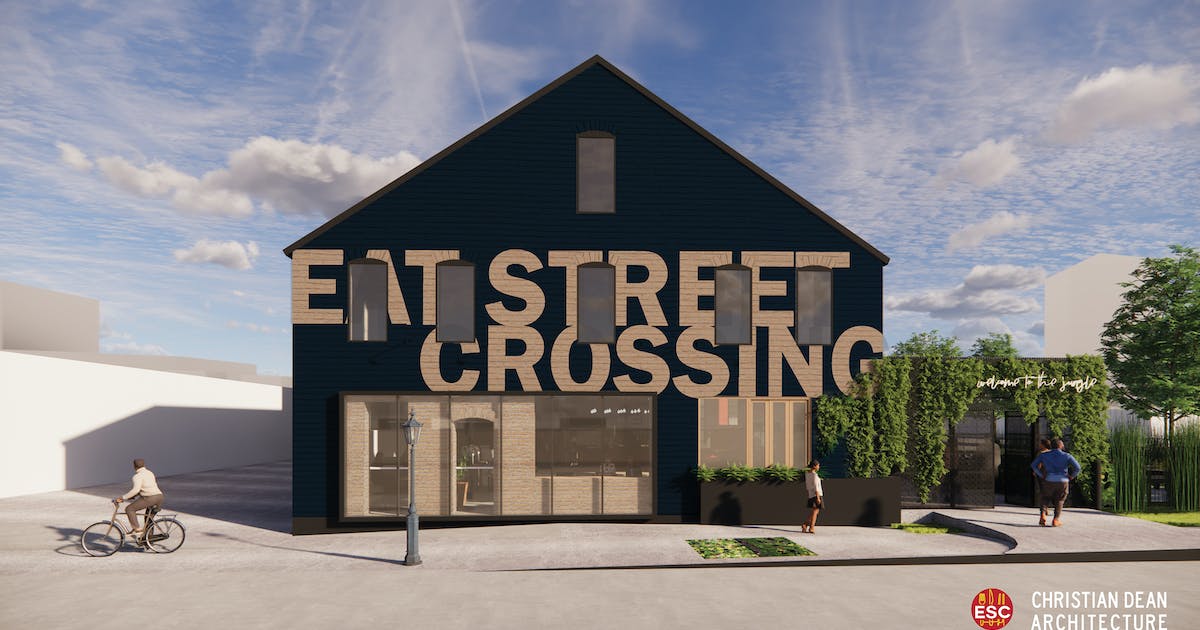 A Minneapolis building that served as a rehearsal room for Prince, Bob Dylan and set for the TV show “Buffy the Vampire Slayer” is getting a whole new creative life as a food hall.

Eat Street Crossing is taking shape inside the Old Arizona Studio (2821 Nicollet Ave. S.) and will feature six food concepts from two well-known restaurant couples and a cohesive and inclusive bar program. The food will come from the creative minds behind Zen Box Izakaya, Lina Goh and John Ng, and Bebe Zito, Gabriella Grant and Ben Spangler. And if you’ve been following Bebe Zito’s Instagram, there’s a hint of at least one special food that will be served inside.

The revitalization of this historic building near the end of Eat Street has been underway since before the pandemic. Ng, a chef and entertainer, was feeling restless, and Goh was also ready for a new challenge beyond their 10-year-old Izayaka.

“We were at a point where we don’t know what else to do,” Goh said. Ng was more direct: “I’m bored.”

Known both locally and nationally for his amazing ramen specialties, Ng was looking for ways to stretch and expand his creativity. Goh, who grew up in Singapore, understands food halls and markets fundamentally.

“There are all these manufacturers and street vendors selling all kinds of cuisine like Malaysian or Indian food,” she said. They were ready for a new challenge when everything was put on hold indefinitely and the couples’ already forming plans had to be rethought.

“The pandemic has changed our perspective,” Goh said. “We must remain hopeful.”

Hope may not be the first word that comes to mind for people outside the Whittier neighborhood. Eat Street Crossing is just a short walk from one of the city’s most reviled buildings: the old Kmart on Lake Street. A few blocks away, fires destroyed buildings amid the tally after the killing of George Floyd.

However, for those who hop on the Midtown Greenway bike path here, or walk to the many restaurants that gave this stretch of road its name Eat Street, or have lived in one of the many low-key establishments nearby, it is a special part of town. And it’s even more accessible with the dedicated Lake Street exit on I-35W.

“We must continue to defend the area – just like Uptown,” the neighborhood where Bebe Zito’s home brick and mortar is, Grand said. “People keep saying, ‘I’m never going to come to your Uptown store. It’s too dangerous.’ I understand why you feel like that, but I hope you come someday. Uptown is special. It’s worth fighting for. And so is Eat Street.

A key part of the building’s new look is to avoid gentrification. “We’re trying to find the soul of this building – and the community,” Goh said.

Inside Traversées, the food will be complementary on all the stands. So will the bar program, led by Trish Gavin, a well-known force in the local cocktail scene who was most recently beverage director for Ann Ahmed’s group of restaurants. In addition to alcoholic drinks, there will be a wide selection of soft drinks and some low sugar drinks to serve those with blood sugar issues.

“The primary focus of the bar is inclusion and intentionality,” Grant said. N/A drinks are an important part of supporting the surrounding neighborhood, which is home to several low-key living spaces.

More details on the food will be released soon, but Grant confirms that the Bebe Zito ice cream will be produced on site and the Honey Butter Fried Chicken will have a permanent home. There will be two Goh and Ng stalls and a Chatime boba tea shop outpost.

Where do bipartisan efforts on mental health legislation stand after the Texas shooting?