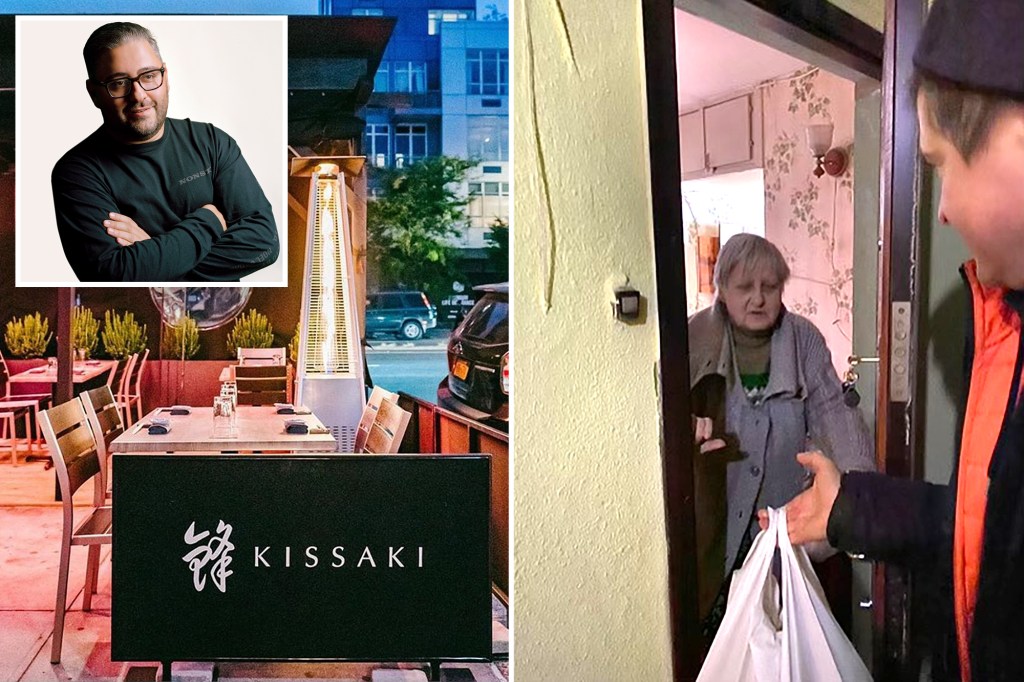 The city’s restaurateurs are doing their part to raise money for the victims in Ukraine. Garry Kanfer, who comes from a Ukrainian-Jewish family, is one: the owner of the Kissaki mini-empire of omakase-focused restaurants has helped start a new nonprofit to bring money to this war-torn country and its people.

“We are dedicated to finding projects directly,” Kanfer said of America for Ukraine, the new nonprofit. “We do not fund intermediaries. We have no expenses. We are building an organization that will be the fastest way to fund people in need in Ukraine today – not weeks from now.

Others in New York’s hospitality industry are also joining the fight.

Restaurateur Keith McNally donated last Tuesday’s earnings to Balthazar – $50,000, which was later matched by VIP customer Scott Asen – for a total of $100,000 to the charity Protect Children in Ukraine in Ukraine. UNICEF, as reported by Page Six.

“PS,” McNally wrote on an Instagram post, “Hope this inspires other restaurants in New York and London to do the same. (If that’s not all the talk of the night, then may -be a percentage.)”

He said that on March 22, all of his restaurants in town – Balthazar, Minetta Tavern and Morandi – will donate “every penny” they earn to the charity UNICEF.

McNally told Side Dish: “I do it because I feel like it’s my duty. I’m not sure I could live with my conscience if I didn’t. I don’t care if other restaurants do the same thing, but I’m still surprised that none of the restaurateurs in London and New York that I asked to participate said yes. After all, in the end, we are all connected.

Meanwhile, Kanfer is also bringing money to the country – and not just through its restaurants. Kanfer launched the Kissaki brand of Michelin-plated omakase sushi in 2020, just before lockdown — and expanded it to five locations, from the Bowery and Upper West Side to the Hamptons, Greenwich, CT and, soon, Miami. He also founded Big Drop, a digital advertising agency that has offices in Kharkiv, Ukraine – a hard-hit part of the country that has come under heavy bombardment from Russia.

He said he spent around $60,000 to help get 58 of his roughly 60 employees to safety in Poland and elsewhere. (One stayed to fight and another stayed to care for his elderly parents and is now trapped in Chuhuiv, which is occupied by the Russian military.)

Then others asked for help and Kanfer said he couldn’t say no. Soon he was talking daily with other New Yorkers who also have family and friends in Ukraine. They raised over $250,000 of their own money and sent it to trusted people in Ukraine to deliver food and medicine to people in need. Then they pitched America for Ukraine.

“We find out who needs help and channel it directly to them through the people on the ground, without waiting for dispatch. These people need help today – not weeks or a month from now,” Kanfer said.

Other restaurateurs, shocked by Russia’s brutality and inspired by the fighting spirit of Ukrainians, are also raising funds for Ukraine.

On March 10, City Winery hosted a concert hosted by gypsy punk band Gogol Bordello and its leader, Eugene Hutz, for Care.org, Doctors Without Borders and Come Back Alive, the largest fundraising group for the Ukrainian Armed Forces. . The concert – featuring Patti Smith, Matisyahu and Suzanne Vega, among others – raised $130,000.

“We felt honored to stand with the people of Ukraine by bringing together New Yorkers who wanted to show their solidarity and connection with the good, freedom-loving people horribly invaded by Russia,” said City Winery founder Michael Dorf.

And McNally’s culinary nemesis Graydon Carter also offered his support for his Waverly Inn, while celebrity chef Jose Andres served meals to refugees on the Polish border. On Monday, Terroir announced that it would also donate “every penny of sales” to Andres’ World Central Kitchen. “Our hearts are aching for the devastation that is falling on Ukraine and its amazing citizens,” the famous wine bar said on Instagram.

Additionally, the Gerber Group’s new club, Daphne, at 50 Bowery, is creating a specialty cocktail to support women and girls in Ukraine, in partnership with Dewars – and a percentage of sales will be donated and matched by Dewars, at the Ukrainian Womens’ Foundation, Scott Gerber tells Side Dish.

New Yorkers also continue to line up to support the iconic Ukrainian restaurant Veselka in the East Village – where at least one Ukrainian staff member has left to fight for his homeland, according to reports.

At America for Ukraine, Kanfer and the others working to create the new nonprofit are doing all they can to help Ukrainians. They haven’t had time to fundraise beyond what they themselves have started. They are working on a GoFundMe page that will link to their site, AmericaforUkraine.org.

Peter Zinkovetsky, a lawyer in New York, is the founder of America for Ukraine, the country where he was born. Kanfer said they were building a database to collect information – like who has food, medicine and nourishment and who needs it. “It’s phase two,” he said.

In other news, we learn… that philanthropic diners joined Chef Daniel Boulud, Co-Chairman of the Citymeals on Wheels Board of Directors, in celebrating guest chefs for the 24th Annual Sunday Dinner at DANIEL Restaurant.

What you need to know before you go.