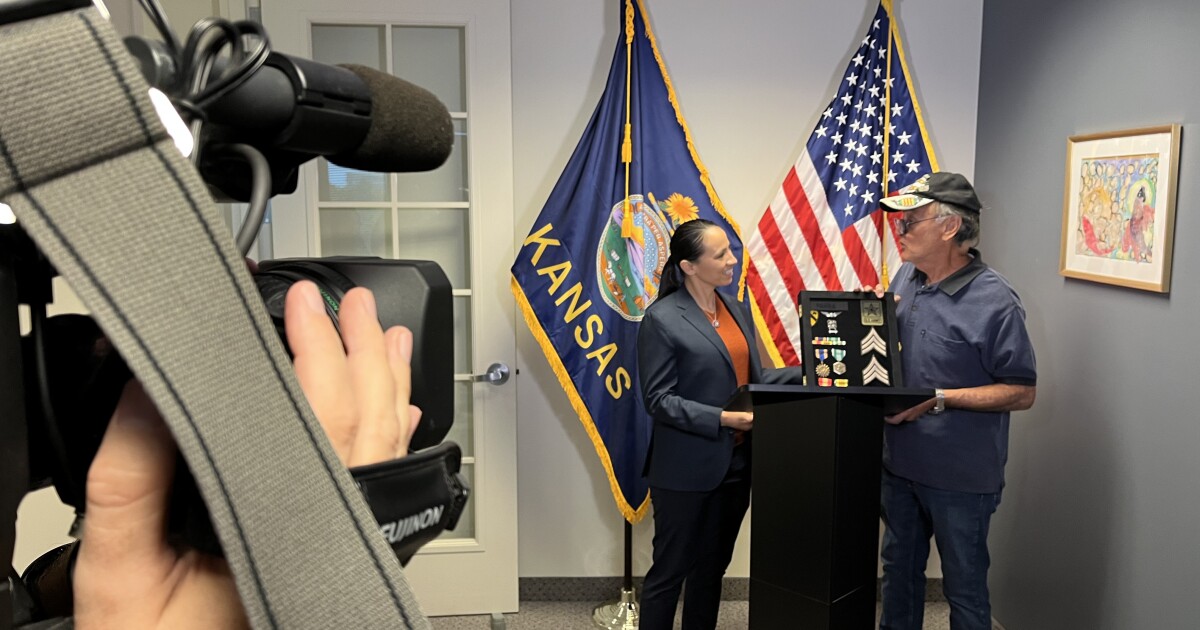 OVERLAND PARK, Kan — Frank Parra accepted a ghost box full of service quarters on Friday afternoon with a roar of excitement from his family, who crowded into a small congressional office in Overland Park.

“Some of them I didn’t even know existed,” Parra said, as Kansas Rep. Sharice Davids handed over the black box with colorful medals inside.

Parra said he tried for about a year and a half to get his missing medals back, but eventually called the rep’s office for help.

Davids and his team contacted the U.S. Army, the Department of Defense and the National Archives to acquire the medals.

“That’s one of the things that’s probably part of the most rewarding job we do in voter services,” Davids said. “Knowing that there are people who need recognition who haven’t is frustrating. When we have the chance to help, it’s a relief and it’s rewarding for the whole team in our district office.

Parra, now 75, spent 15 months in Vietnam. His family left Mexico just before he was born, making him a draft-eligible U.S. citizen.

He knew friends who encouraged him to dodge the draft.

“They said, ‘Don’t go, don’t go. You are going to get yourself killed. I have no choice,” Parra said. “But everything went well.”

One of the most shared stories on Friday afternoon was first told in a newspaper clipping that Parra kept in a glass case at his home.

The headline reads “Civilians Rescued by Cav Chopper Squads.” Parra was the first to jump from the helicopter, saving the people of Vietnam who ran over a landmine.

“I was the first on the ground because I was in the lead pack. Everyone else just followed,” he said. “We saved a lot of people. One of them was a young child that I took back to the chopper.

Parra did not know what had happened to the child he had saved. His own daughter only recently learned of her father’s war stories.

“I heard stories today that I didn’t even know because Vietnam veterans weren’t talking about Vietnam,” Francesca Parra said. “[They] always not.

Obtaining these medals has led to a connection between father and daughter as he begins to open up, some 50 years after his return.

“It’s part of our family’s history and legacy, so I’m happy to be able to share his legacy that he started for us,” she said. “You find out when you’re older that your parents are real people. They’re more than mom and dad. Finding out about their story is really nice.

Parra plans to proudly display his medals in his home until he passes them on to his daughter and grandchildren.