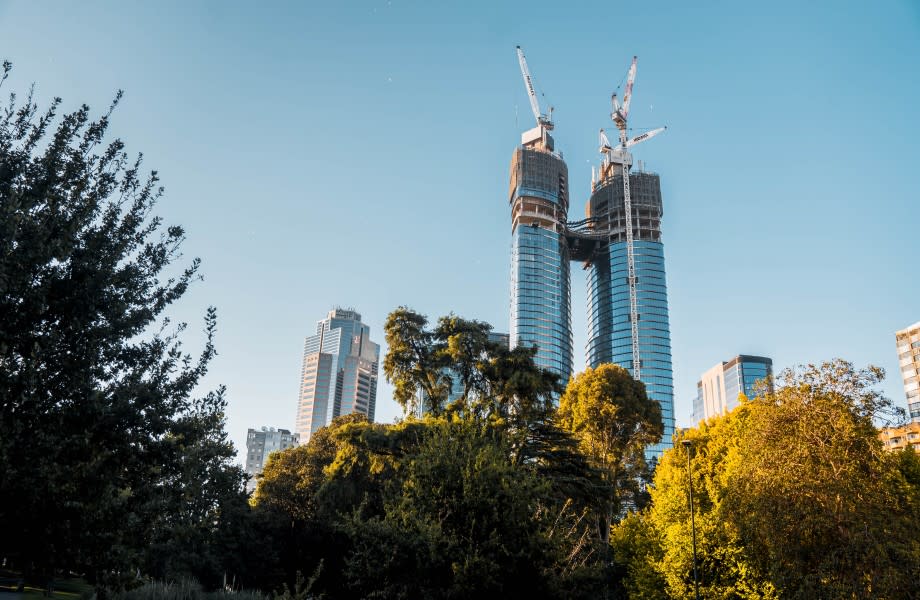 The 4140 m² site at 308 Exhibition Street has been purchased by SP Setia in May 2016 from Telstra for $101 million. If SP Setia gets its asking price, it will translate to a record $1 million per hotel room.

In 2018, the two-tower plan, the 60-story Sapphire by the Gardens luxury apartment tower and the 62-story Shangri-La hotel tower, was announced with an expected cost of $565 million.

At the time of launch, the 300 Sapphire by the Gardens apartments were 95% sold, 60% to foreign buyers. One penthouse apartment had been purchased for $14.8 million while another was valued at $29 million with interest.

The hotel tower has a gross floor area of ​​57,114 m² with an air bridge connecting it to the apartment tower on level 46.

It overlooks the UNESCO-listed Carlton Gardens and Royal Exhibition Building and is due for completion in late 2023.

Gus Moors of Colliers has announced it will open in early 2024. Moors, along with Karen Wales and Stephen Hynes and Paul Bartlett of Deloitte are negotiating the sale.

“As hotel markets across the country shift into rapid recovery mode, the timing of the delivery of the Shangri-La will see this 500-room property open at an ideal time in the hotel cycle,” he said.

Moors said Multiplex has now completed construction on the project.

“They have completed construction of the structure and have begun the fit-out phase, so they feel this is the perfect opportunity for an investor to join in on this phase of the build and take ownership of the end product.” , said Moors.

Hynes said the hotel offers 360-degree panoramic views of the city and will include luxury amenities.

“Facilities will include a range of eclectic bars and restaurants with al fresco dining, expansive conference facilities, a spa and wellness center, indoor heated swimming pool and more,” Hynes said.

The hotel is being sold through an international expression of interest campaign ending April 28, 2022.

SP Setia also has a residential project caught up in the Probuild collapse with Probuild named as the builder of UNO Melbourne.

The estimated cost of the project, according to BCI data, was $200 million, with SP Setia’s 2020 annual report forecasting an expected gross development value of $462 million.

It recently announced investments in healthcare real estate projects in Malaysia and continues to hold a 40% stake in the Battersea Power Station development project in London, which recently announced the start of its second stage with 254 apartments and a 20,000 square foot dining room.

What you need to know before you go.