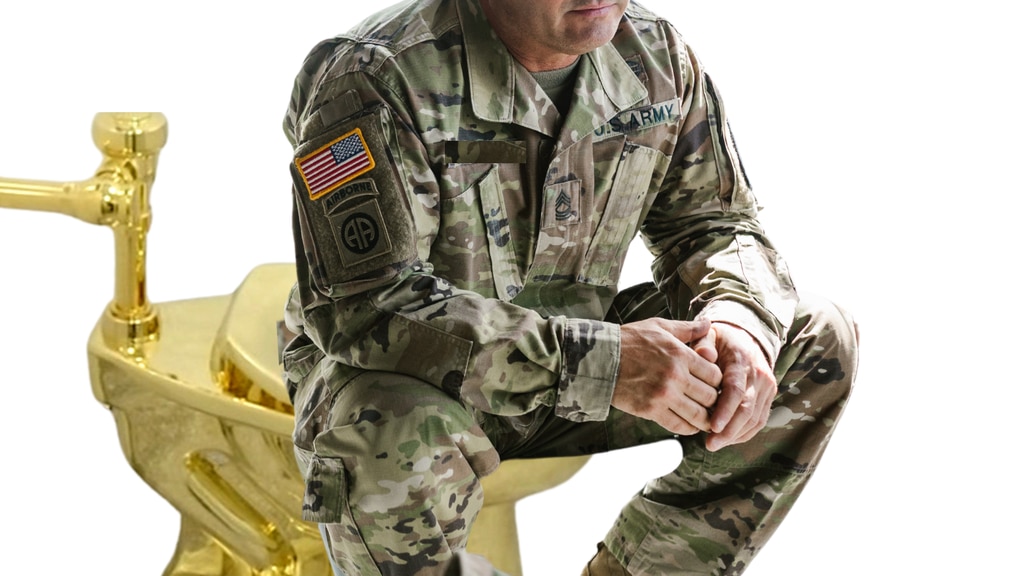 A group of warrant officers at Joint Base Lewis-McChord, Wash., gained notoriety last week after their hangar bathroom was shared by US Army WTF Moments.

The 2-158 Assault Helicopter Battalion latrine lacks many of the amenities that soldiers have come to know and love in most Army bathrooms – the familiar washed-out glow of flickering fluorescent lights; rusty and broken hand soap dispensers; suspicious puddles; and stained ceiling tiles that inspire questions you don’t want answered.

Instead, it’s exactly what a wet, nasty, freezing infantryman stuck in the field in the Yakima training area imagines those damn pilots have: an ambience-lit “Alaskan Lodge” lounge, with paintings on the wall, matching hand soaps and air fresheners. . There’s a putt-putt green, taupe backsplash, and classic rock emanating from a CD clock radio.

Army Times tracked down and caught up with Chief Warrant Officer 2 of the 16th Combat Aviation Brigade who orchestrated the operation. The soldier is a former infantry non-commissioned officer who once worked for an international chain of luxury hotels – “if it’s not the Four Seasons, it’s that other company”.

“I used to regularly use a bathroom with a granite counter top with a single cubicle that had linen towels and running water, you know, all those types of things that you consider ok of oneself working in a place like this,” he said. “And then I joined the [infantry].”

The current warrant officer, a Black Hawk pilot, asked in his phone interview that Army Times hide his name so that a news article about his unit’s candle-lit bathrooms wouldn’t be the top Google result for his name. . We reluctantly agreed.

“I don’t want to be known as the bathroom guy for the rest of my career,” he confessed. “But this whole idea of ​​trying to make this place a little bit nicer every day – and maybe the next guys can take advantage of that after my group stages out of here – it’s actually a really cool thing. “

He also noted that this would not have been possible in his old infantry unit.

“If you were to do this in an infantry company, someone would find a way to break everything in there,” he explained.

The Squad Public Affairs Officer, Captain Kyle Abraham, however, is not granted such anonymity and will have to deal with this forever in his Google History. He described latrines as what can happen “when soldiers are proud of the unit and proud of where they work”.

Seriously, how did this happen?

The project began last fall when the battalion’s pilot mafia realized they had been spoiled by occasional visits to high-end facilities at other airports in the region.

“They have people coming in and out of there with private jets,” the warrant officer explained. “And then you have all these dirty army guys walking in and out, drinking all their coffee and eating their snacks.”

A realization and two rules set the project in motion, he said, “We should have some nice things too…[but] everything that goes in the bathroom should be free.

The second rule? “It has to be classy,” said the pilot. He said he vetoed a few articles that didn’t “fit the vibe we were trying to create.”

“Someone wanted to put a wicker chair in there, and it was absolutely forbidden,” he explained. “It looked like cheap patio furniture, and we weren’t going to have that in there.”

Over time, giveaways on Facebook Marketplace and other sites have coalesced into a cohesive theme – “Alaskan Hunting Lodge,” as the Warrant Officer described it.

The only enemy of the project? The former brigade command sergeant major, according to the adjutant.

“He did exactly what you think a brigade sergeant major would do,” the pilot explained. “He turned the [fluorescent] the lights turn back on, and immediately within minutes, the next guy who enters will automatically turn off the lights.

This battle lasted about a month, he said. But every time he has entered “over the past three or four months…everything is as it should be – music on, lights off, lamps on and all peaceful,” he added.

Meanwhile, the battalion has officially appointed one of its standardization pilots as the facility’s “Janitorial Executive”, responsible for listing cleaning tasks – which is dominated by warrant officers from the unit.

Does anyone actually use it? (and can visitors?)

The warrant officer and Abraham swore that the soldiers regularly used this toilet.

The shed where the latrines are located is one of the brigade’s newest facilities, Abraham said, so it often hosts ongoing meetings, special events and distinguished visitors.

The warrant officer pointed out that “everyone, from the most recent soldier on duty to the [I Corps] the commander can use the bathroom – it’s not a lounge for warrant officers or anything like that.

He added that some of the general officers on duty have visited and that his brigade commander is giving the facility “a glowing review”.

When asked about the next target upgrade, the pilot said the unit was trying to put together a collection of CDs for the clock radio and a small shelf to organize them.

“So anyone who’s willing to donate a CD — maybe like an old Kenny G CD or something — that would be appropriate,” he said. Army Times has yet to locate a representative for Kenny G to help connect.

When asked if he had a moral conflict over the start of a possible arms race in the toilet, the pilot said he had not “lost sleep over it”.

“There would be worse arms races there,” he said. “If anything, it will only have a positive effect on the aviation community.”

Editor’s note: The author of this story, Davis Winkie, originally meant “shit” in the title. He was rejected by his editors, but he wants you all to know that he accepted the new title on condition.

Observation Post is the Military Times’ one-stop-shop for everything off-duty. Stories may reflect the author’s observations.

Davis Winkie is a staff reporter covering the military. He originally joined Military Times as a reporting intern in 2020. Prior to journalism, Davis worked as a military historian. He is also a human resources officer in the Army National Guard.